Imagine a vehicle that emits only water vapour. Such technology has now become possible thanks to hydrogen. For over ten years, Switzerland has been an open-air laboratory for this promising renewable energy source. Several major projects led by ETH Zurich and EPFL, distribution companies and start-ups are now reaching maturity and are placing the country at the forefront of a green revolution. 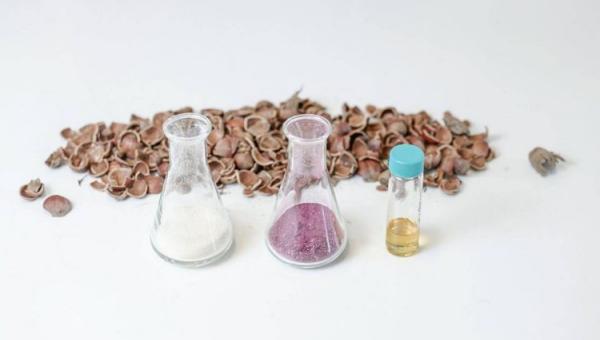 Hydrogen is one of the most promising answers in the fight against global warming.  The long quest to find a non-polluting source of energy, in order to address the challenge of decarbonising our planet, has now produced what researchers call 'green hydrogen', or hydrogen that is obtained exclusively from renewable sources. This development, which is the result of almost a decade of research and driven by private companies, offers ground-breaking possibilities for transport, a key sector in the fight against global warming. 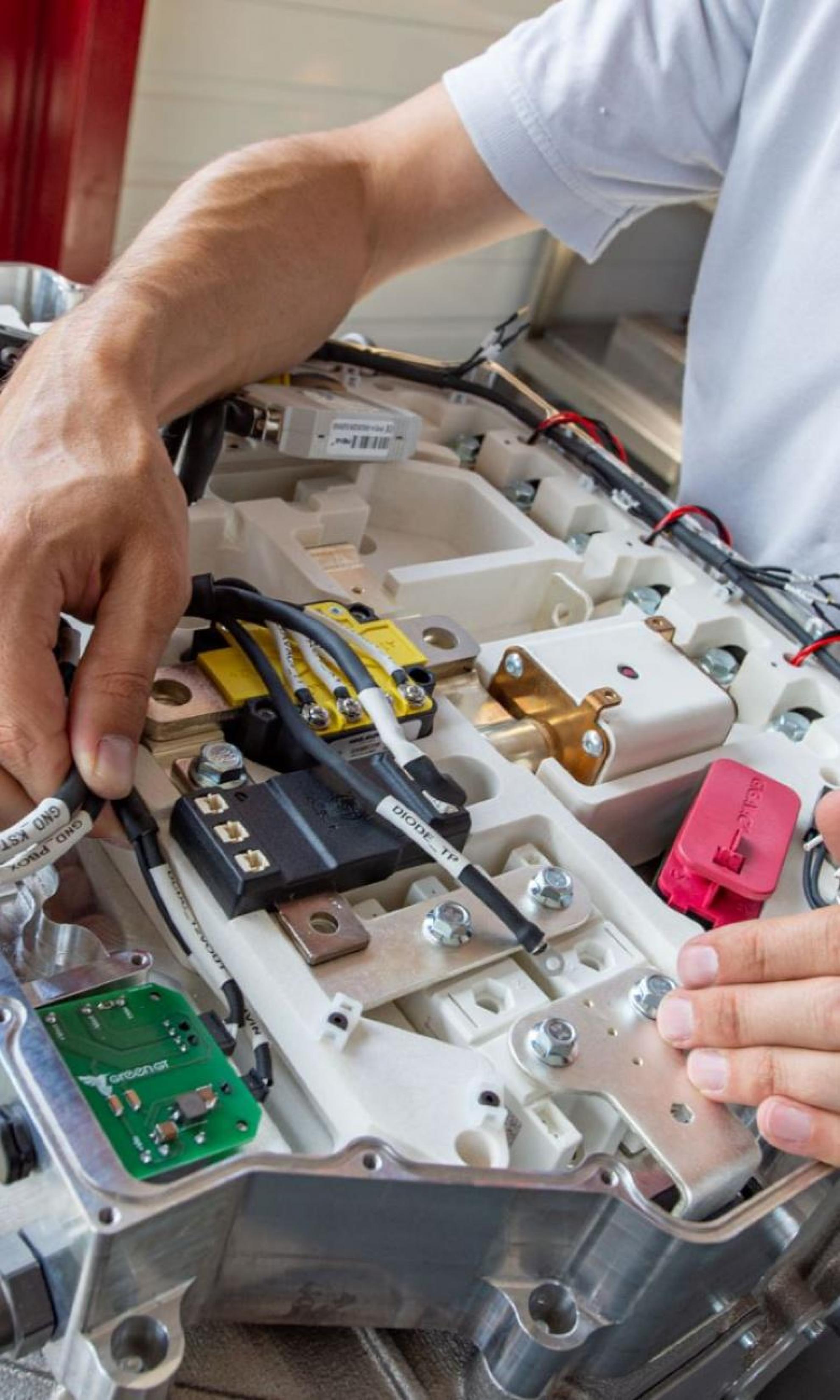 Switzerland is the testing ground for this innovation. It is the first country in the world to trial this new mode of zero-emission transport at the national level, after having designed the entire ecosystem that goes with it. In Europe, other countries, such as Germany and the Netherlands, are following in its footsteps. As a world leader in the production of hydroelectric power, Switzerland is among the pioneers of green hydrogen. It also has sufficient other sources of renewable energy to ensure the production of green hydrogen.  Yet how is this clean energy used to power an electric vehicle that only releases water vapour into the atmosphere?

As automotive journalist Philippe Clément explains in Swiss newspaper Le Temps, the technique of hydraulic fracturing is used to produce hydrogen (H2), carbon monoxide (CO) and carbon dioxide (CO2) by breaking apart water (H2O) molecules at a high temperature. This procedure is followed by a purification stage to extract only pure hydrogen.  Once inside the vehicle, the hydrogen is forced through a platinum catalyst at a high pressure, causing it to split into two hydrogen ions (H+) and two electrons, which provide the power to drive the electric motor of the vehicle. The H+ ions are combined with oxygen from the air to form water that is released in the form of vapour.  This is the basic principle of fuel cells.

Several Swiss companies and start-ups, such as GreenGT, have become experts in the production of this technology. Since it was founded in 2008, GreenGT, which is based in the canton of Vaud, has developed various high-power electric-hydrogen propulsion solutions for the transport and motor sports industries.  In September 2020, GreenGT introduced its fourth sports car, H24, designed especially for the 24 Hours of Le Mans. 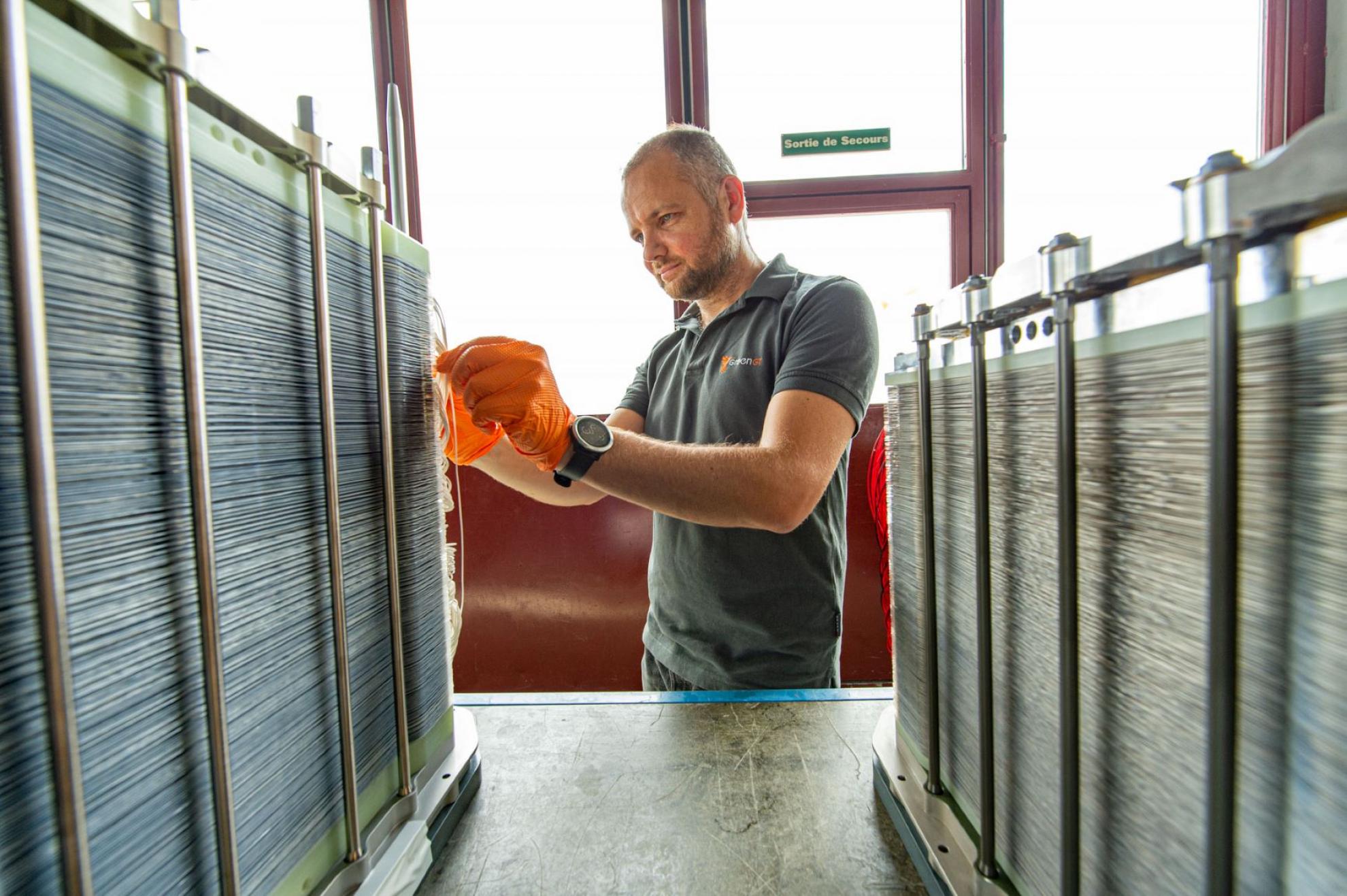 The challenge of ensuring supply

The H24 sports car is unique in that it is powered by the energy released as the result of oxidation when hydrogen reacts with oxygen inside a fuel cell. This energy is then transformed into electricity that directly powers the electric motors at the front and back of the vehicle.  The secret of this innovation therefore lies in the fuel cell, which is an additional alternative to traditional battery technology.  The range and refuelling time of electric vehicles powered by fuel cells are close to that of petrol cars. But the main difference is that fuel-cell-powered cars emit zero CO2.  These advantages have appealed to several automobile manufacturers, such as Toyota, Daimler and Volvo.

The challenge lies in supplying and being able to produce hydrogen, that is to say by electrolysing water using electricity from a renewable source. In Switzerland, the number of hydrogen filling stations can be counted on the fingers of one hand. In October 2016, the Swiss Federal Laboratories for Materials Science and Technology (EMPA) established, in Dübendorf (canton of Zurich), the first hydrogen refuelling station for cars with a filling pressure of 700 bars. One month later, Coop opened a public hydrogen filling station in Hunzenschwil, canton of Aargau. If this technology is to take off, access to hydrogen refuelling points needs to be increased. 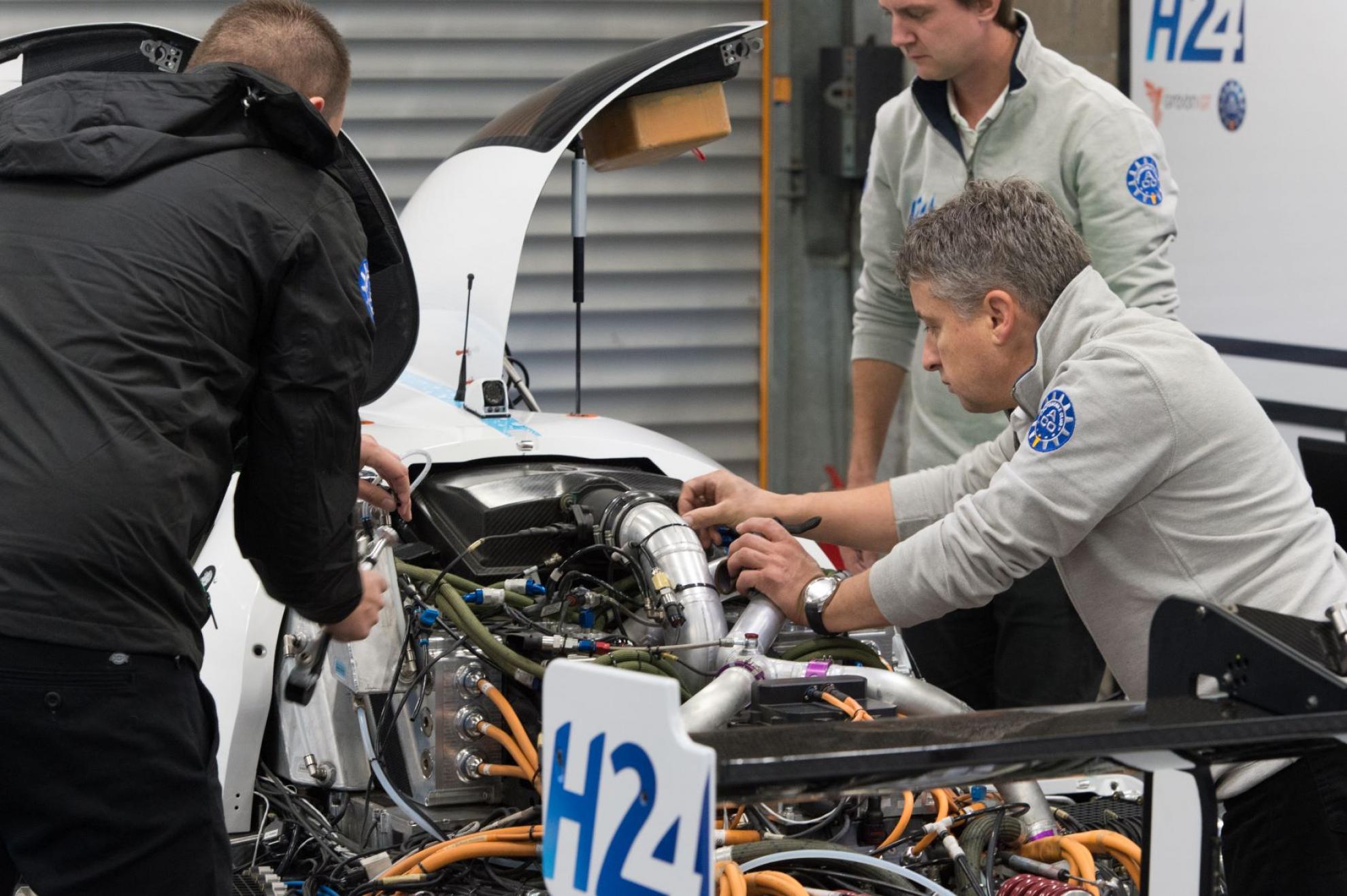 Since its foundation in 2008, the Vaud-based company GreenGT has been coming up with a variety of high-power electric propulsion solutions for road transport and industrial vehicles

For GreenGT, such alliances are an essential prerequisite for the major leap from petrol and diesel to hydrogen. In France, where the company is also present, GreenGT has signed a contract with Carrefour to supply several 44-tonne hydrogen powered trucks.  In Switzerland, GreenGT is designing a 40-tonne heavy goods vehicle (HGV) for Migros Geneva, while other companies such as Avia, Coop, Coop Mineraloel, Migrol, Agrola and Fenaco announced in May 2018 that they intended to convert a large part of their HGV fleet to hydrogen by 2023.  This ambition is being made a reality by the association founded for the purpose, H2 Mobility. Together, the seven companies operate over 1,500 service stations and have a fleet of around 1,700 trucks. They claim to be able to jointly manage the development of a hydrogen distribution infrastructure at national level.
Hydrogen is not only revolutionising transport.  It is also offering promising solutions in other sectors, such as the storage of renewables.  Most solar panel owners have probably dreamed of being able to store their renewable energy from one season to the next. Yet for now, even with the most efficient batteries on the market, it is not possible to store power for more than a few days. Many owners therefore decide to sell their surplus electricity back to the grid, which makes them dependent on their grid operator and the buy-back price proposed. However, this energy storage issue will soon be a thing of the past. 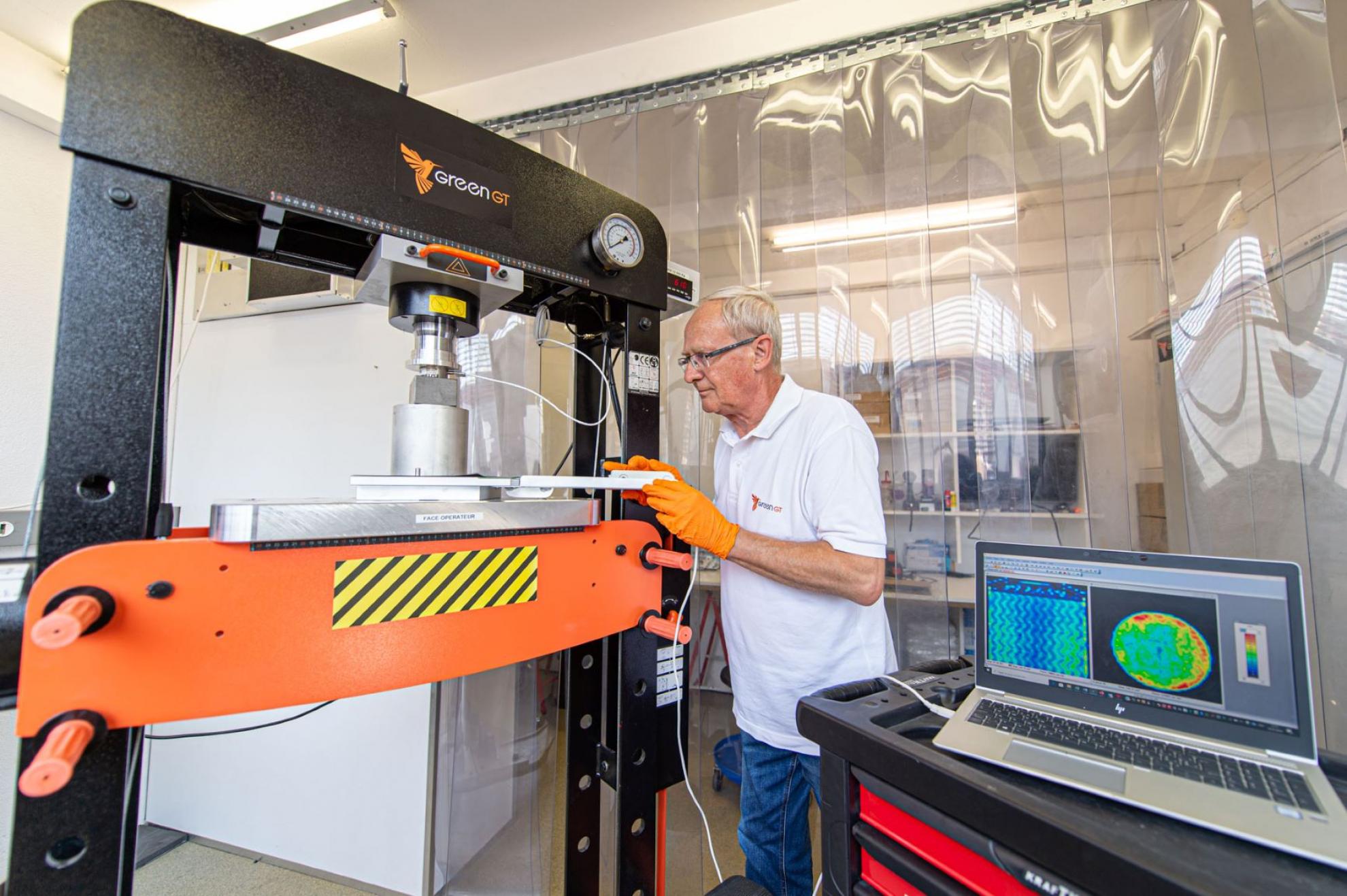 In Sion, GRZ Technologies is developing a new type of long-life battery. The start-up, a spinoff from EPFL's Valais campus, has found a way to store surplus solar power produced during the summer for use in the winter months.  The electricity produced by solar panels during the summer will be stored in the form of hydrogen to be reused when needed in winter, without having to resort to the grid.
The secret of this innovation lies in a metal hydride that can efficiently store hydrogen. This is the brainchild of GRZ Technologies, which was co-founded in 2017 by Noris Gallandat, Claudio Ruch and Professor Andreas Züttel. The concept of storing energy in the form of hydrogen is not new, but it has taken a long time for it to be applied in practice. GRZ Technologies is therefore breaking new ground, as its know-how now makes it possible to store a much higher density of hydrogen than a traditional gas bottle, and without the risk of explosion. 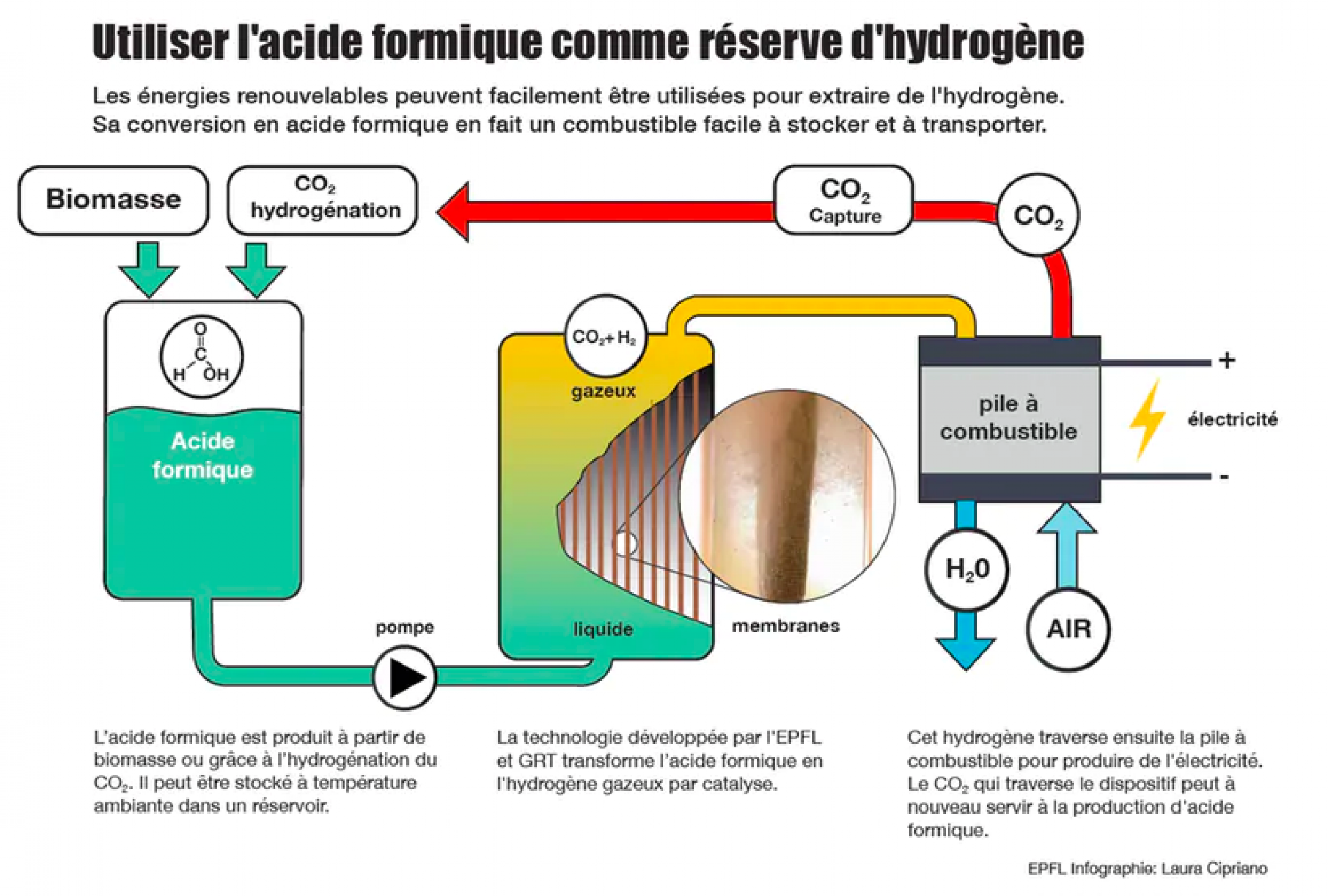 But how does this technology work? The hydrogen is absorbed by a porous material which has the advantage of having the capacity to store six times more energy than a lithium-ion battery and which has a better range.  In contrast with traditional batteries, long-life batteries do not discharge if they are not used. They can withstand wide variations in temperature and can have a long lifespan.  They also only emit water vapour.
The Sion-based start-up makes no secret of the strong potential of the technology that it has developed.  It is focusing its efforts on stationary storage, while recognising the wide range of potential uses, particularly in relation to transport, including hydrogen cars and maritime transport. The co-founder of GRZ Technologies makes no attempt to hide his ambition of becoming, in the medium term, the main supplier of storage systems in Switzerland and Europe. And his ambition is not unrealistic.  According to a report by a consortium of European gas companies, a hydrogen pipeline network spanning 23,000 km will run through Europe by 2040. This 'hydrogen backbone' will connect production sites in some ten countries, including Switzerland.

Source
The future of Swiss transport is hydrogen-powered
https://houseofswitzerland.org/swissstories/environment/future-swiss-transport-hydrogen-powered